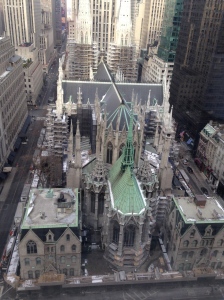 Day 2 opened with us looking out our window, with a gorgeous view of St Patricks Cathedral. Sadly, it is currently under restoration and so only parts are visible under the scaffolding, but what was uncovered is stunningly beautiful. After a lovely breakfast with our group, hubby took off for a couple hours of meetings while I took a tour through the infamous Sak’s on 5th Avenue. It really is worth the trip to see. It is a shoe lovers paradise, with an entire floor dedicated to womens shoes. Oh my! While I love shoes, my favorite room is the main floor where all the fragrances, makeup and handbags are located. I love all the wood, soft lighting, high ceilings and marble floors. It’s a beautifully maintained, old building in one of the older cities of the country, and its worth the peek inside. 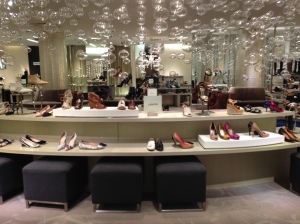 Meetings done and rejoined with my spouse, we decided to check out SuperBowl Boulevard. Oh, holy mother of jelly beans, it was a ZOO! The walk over was a delight. Being a saturday, the streets were walkable, and the weather was, for me, nearly 100 degrees warmer than in Minnesota, so extremely pleasant!. The exception, however, was the Boulevard! I am not exaggerating when I say it was a shoulder to shoulder, sea of tourist madness, that would wither even the stoutest diehard fans endurance. Dear, sweet Big Man bravely tolerated about two blocks, for the sake of his adventurous woman, then breathed a sigh of gratitude when I had my fill of mass humanity and veered off on a side street.

Together, we then, toured the inside of the cathedral we overlooked from our room. However, the amount of scaffolding on the inside exceeded that which was outdoors and made it impossible to see its’ beauty! A few areas were restored and viewable, and if those little peeks are any indication, when the project is finally finished, it will truly be a priority #1 New York City destination.

As evening approached, it was time to get ready for our scheduled dinner. We were whisked off in buses to the New York City Public Library. This is another beautifully restored building.

While we enjoyed delightfully delicious appetizers, the New York Young Peoples Chorus sang a compliment of songs that absolutely charmed us. 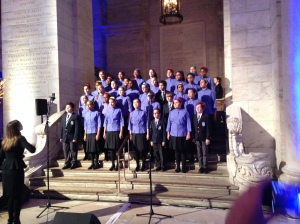 At the conclusion, it was off to the ballroom where we sat for dinner, served to us on beautiful china, with gold rimmed stemware. The beautifully restored, domed room was wrapped in tea lights, and I was charmed by my football table host, Dione Sanders. What a wonderfully charming and humble man. He truly could be a modern day ‘Cheaper by the Dozen’ as he ticked off the gaggle and menagerie of people living in his home! Ray Lewis, another table host, came up and gave him a huge bear hug. These men may be competitors on the field, but as I have come to understand, many are dear friends off the field. 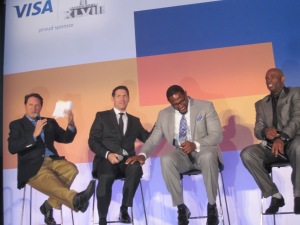 After dessert, Chris Meyers moderated an intimate interview and Q & A, including the two of them, who was also joined by Steve Young. Once again, being the wallflower I am, I put my hand up and asked the first question. Dione, having already gotten to know me, addressed me as ‘Miss Minnesota’. (I can only dream!) My question to the three of them was: ‘You all are very successful in your lives and careers, who or what in your life keeps you grounded and your heads on straight?’ 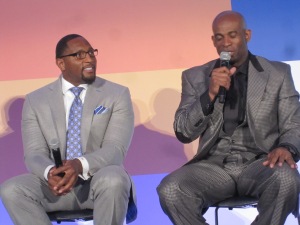 It was refreshing and uplifting to hear accomplished, successful grown men talk with respect, reverence and gratitude about the influence and accountability their mothers roles had, and continue to have, in their lives. Answering last, Steve Young added faith in Christ, something I found particularly uplifting and brave in this current climate of religion phobia we have.

After another wonderful event meeting pro-ball players, I have had my preconceptions of the NFL completely shattered. You must understand, being in Minnesota, the Vikings have not been the best of role models as ambassadors for their sport. Running over meter maids is not what most parents have aspirations for their children to role model and take after. But these intelligent, articulate, experienced, and surprisingly humble men are responsible for changing this old lady’s perception.

And that, was a the wonderful conclusion to day two. Tomorrow: Game Day.

One thought on “Super Bowl 2014: DInner with Dione”