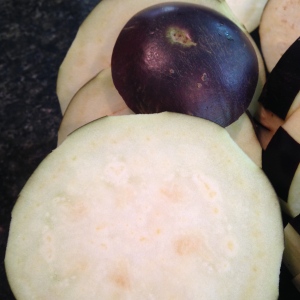 Did you know that eggplants are either male or female? I was watching Alton Brown one day while he was cooking eggplant and learned this tip that really has come in handy: When you select an eggplant, try to find a male.

Because it will have fewer seeds! Why would you want to reduce the seeds in your eggplant based dish? Because they can be bitter. Not only do females have lots of seeds but the older the fruit, the more bitter the seeds.

How do you determine if your eggplant is a male or female, without cutting it open? By the blossom end. A female will usually be indented like a belly button, and oval shaped. A male will have a smoother, flatter blossom scar and be more circular. Also, younger eggplants will have fewer seeds than older eggplants.

The eggplant above is a male, and as you can see, has very few seeds. This tip USUALLY works but fair warning, I have picked out what I THOUGHT was a male, but turned out to be female. The scar on this one is more ovoid shaped, but it was flat, not indented. I have found that to be a better indicator than the actual shape.

One more tip: Allow time to salt your eggplant. Not only will it reduce the moisture, which can affect the way it cooks, but it also draws out any bitterness that might be in the fruit. I cut mine into discs or slabs, salt and let drain on a cookie cooling rack over my sink for at least 15 minutes, up to an hour. Then I lay on paper towels and press firmly to extract as much moisture as I can. Once this is done, they are ready to cook according to your recipe. 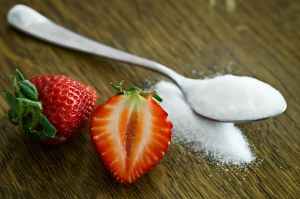