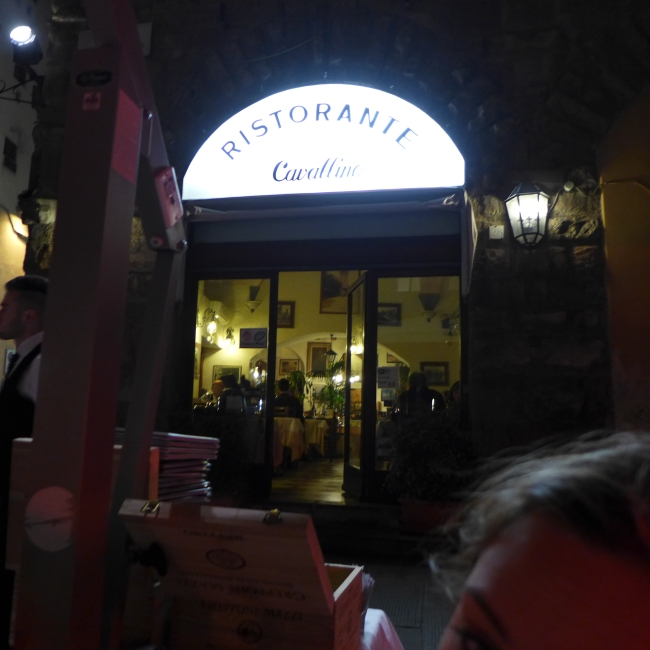 After a full day of walking the Boboli Gardens at the Medici Palace (Villa Medici), and Accademia Gallery which houses the statue of Michelangelo’s David, exploring the boutiques in the side streets, we found ourselves back in a piazza near my daughter’s apartment looking for gluten free dinner options. We were initially headed for a little place she had been wanting to try when we passed this Ristorante, and I mentioned to the girls how good the mussels looked on someones plate, as we had passed through earlier that day. We stopped to check the menu, and a kind gentlemen came over to ask if we were hungry. We let him know his menu looked good but we had gluten intolerance (senza glutine) issues. Well, well, well…comes to pass they had new ownership and had incorporated ‘senza glutine’ as part of their menu, which is why my daughter had not noticed it prior.

It was still fairly temperate from the warm day (in march, it can be quite cool, but we lucked out on beautiful weather) so chose to sit outside, since the Piazza della Signoria is beautiful with statues everywhere and a giant fountain that is lit at night.

We had a wonderful meal and all our dishes were delicious. My daughters ordered a gluten free pizza that was absolutely killer to die for. The crust, unlike american GF, was soft, tender and flavorful. (American GF tends to be like a cracker or at the very least, chewy or crispy). Italian pizzas are not like american, where quantity seems to be preferred over quality. This pizza had high quality toppings which shined in its simplicity. I will take a pizza like this any day over the cheese laden gut bombs in good ole USA. I’m not knocking American pizza, its just that it is very different and if you travel expecting it to be the same, you will be disappointed. But then, if you travel expecting it to be like ‘home’, you are missing the point of traveling.

I asked the waiter if he had a antipasti he recommended, and he brought me this beautiful platter with fresh greens, juicy sweet little tomatoes, prosciutto, salami and two little crostini, one with a savory mushroom topping, the other a traditional bruschetta. The quality was excellent, and the meats could be shared with the girls : 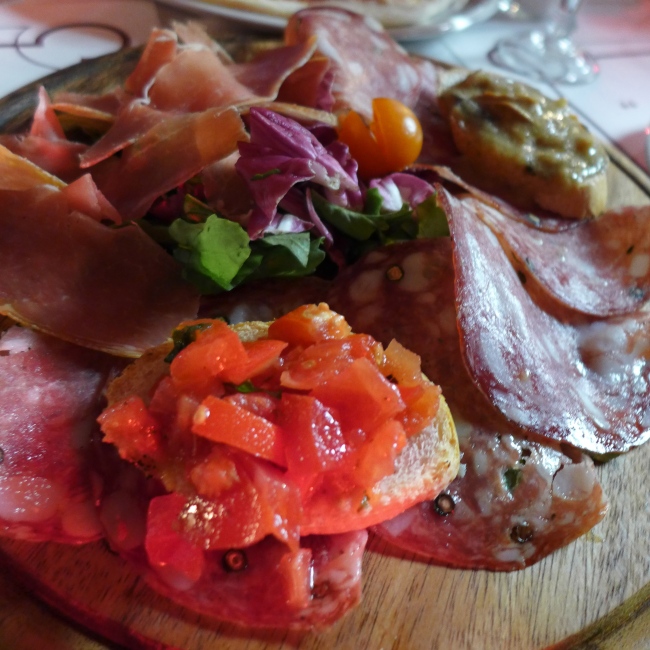 For our Secondi, the girls went for pasta, and I got the wild boar. I tasted theirs, they tasted mine. All were amazing, the pasta was perfectly cooked, the sauces were simple but complex in flavor. I know a good sauce, and these were made from scratch, well balanced and flavors fully developed. Bolognese sauce can be amazing or gross, depending upon the skill and time put in to making the sauce. This was amazing. (3 amazings…yes, it really was that delicious! Sorry for the half eaten plate, the girls were diving in to it before I could grab my camera!) Notice how it’s not sauce heavy? That is the way it should be served.

Doesn’t that look so yummy you want to eat the screen??? I know, and trust me, it was! Please be adventurous! Wild boar is a local favorite, and it’s hard to go wrong ordering what the locals eat.

I don’t have a dessert to recommend, other than panna cotta here. But with so many gelato stores nearby, it’s not a hardship. I would highly recommend a grappa to go with your espresso! They have a lovely selection here by the glass. I had the waiter recommend one for me, based on my after dinner drink tastes.

While I was searching the internet for appropriate links, I saw some negative reviews by american tourists of this place. I will reiterate that this Ristorante is under new ownership, and they are very proud of the new menu and quality of food they serve. I found the waiter and staff to be helpful, charming and well versed on their menu. An important point to make is that this place is unlike other eateries we visited throughout our trip. This one did NOT have the service included, so they DID run on tips. Some might be put off by the waiter informing them of this, but please, do not be offended. They are merely letting you know that the tip is not automatically included in the price, as it is in most establishments. Therefore, it is up to you to tip. In the rest of the places we ate they had “Service Compris” which means they automatically add in 15%. Many travel guides warn tourists to not tip because you end up double tipping. I am a fan of tipping over service charge added, because if service is excellent (or terrible), I can compensate accordingly. We had excellent service, so I tipped generously. Besides, my daughter lives around the corner, and she would be back for pizza!

If you are passing through Piazza della Signoria, I highly recommend stopping in.

One thought on “Gluten Free in Florence, Italy – Day 2”